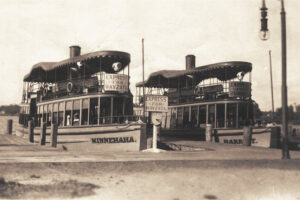 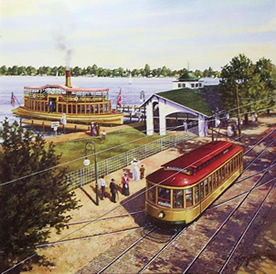 Minnehaha’s story begins during the turn of the twentieth century, when the Twin Cities of Minneapolis and Saint Paul were becoming a large metropolis of more than 600,000 residents. The local economy was driven by the flour milling industry, and many of the moguls who owned the mills built grand country estates on Lake Minnetonka. A large number of middle-class families were able to move out to the lake as well.

With their jobs located in downtown Minneapolis and Saint Paul, many of the lake’s new middle-class residents struggled to find a viable way to commute to work. Workers employed by the lake’s wealthy residents experienced a similar struggle. Under the direction of Thomas Lowry and Calvin Goodrich, the Twin City Rapid Transit Company (TCRT) constructed a streetcar line from Minneapolis to the lakeside community of Excelsior in 1905. Commuting time from Lake Minnetonka to downtown Minneapolis was cut down to approximately 45 minutes.

With its many bays, islands, and peninsulas comprising 125 miles of shoreline, Lake Minnetonka was not a practical place to serve by rail. TCRT overcame this by constructing six “Express Boats” in 1906 that would act as an extension of the streetcar system on the water. Designed by Royal C. Moore of Wayzata and built in TCRT’s South Minneapolis streetcar shops, these vessels were each 70 feet long, nearly 15 feet wide, and resembled TCRT’s streetcars in every detail: split reed caned seating, pocket windows, and a yellow and red color scheme. They were even named after popular Twin City streetcar stops: Como, Harriet, Hopkins, Stillwater, White Bear, and Minnehaha. Thus, they were nicknamed the “streetcar boats.” 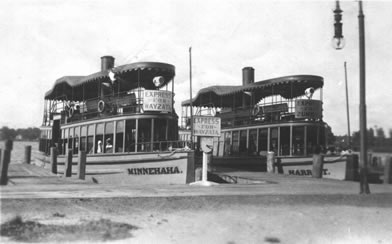 Between 1906 and 1926 the streetcar boats provided fast and reliable transportation for the residents of Lake Minnetonka, operating on hourly circuits along an initial total of four routes. In all, the boats made scheduled stops at 26 landings around the lake. Most passengers connected to streetcars in Excelsior, but connections could also be made in the communities of Deephaven and Tonka Bay. The boats proved to be immensely popular, prompting TCRT to add a seventh vessel to the fleet in 1915. With only two exceptions, ridership on the streetcar boats remained above 200,000 each year until 1921.

The streetcar boats’ success came to an abrupt end. With improved roads and rising interest in automobiles, many of Lake Minnetonka’s middle-class residents stopped riding the boats. TCRT suffered financially as a result of this and made cuts to steamboat service on the lake after 1922. Still, the company struggled to turn a profit and made the decision to discontinue all steamboat service on Lake Minnetonka in 1926. Three of the streetcar boats, including Minnehaha, were scuttled (purposely sunk) in deep water north of Big Island that summer. Three others were scrapped. One of the boats, the Hopkins, was sold to a private entity and used as an excursion boat until it, too, was scuttled in 1949.

The scuttled streetcar boats remained mostly forgotten at the bottom of Lake Minnetonka until 1979, when a diver named Jerry Provost located one of the wrecks lying approximately 60 feet below the surface. Despite being submerged for more than 50 years, the wreck was in good condition. 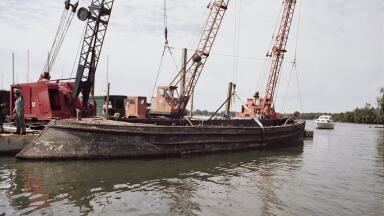 With the help of a local dredging company, Provost and his crew worked tirelessly to raise the wreck back to the surface in August of 1980. The salvage operation took several days to complete and required the use of three cranes, three barges, and eight airbags. Once surfaced, the name gradually began to appear on its side: it was the Minnehaha.

Provost’s vision for the salvaged vessel was to have it restored and returned to passenger service. However, due to a set of complicated circumstances and a lack of organization, Minnehaha sat in dry dock for the next 10 years with an unknown future. After years of litigation and uncertainty, ownership was finally transferred to the Minnesota Transportation Museum in 1990. A complete restoration was begun later that year. 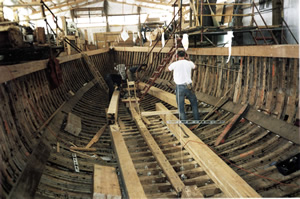 For six years volunteers worked to restore Minnehaha back to her original glory. All of the deteriorated wood was replaced. A new keel and keelson were installed. A vintage steam engine and modern boiler – a combined weight of approximately 12 tons – were lowered into place. Original split reed caned seats were recovered and installed in the rebuilt main cabin. Steamfitters, electricians, and engineers brought the propulsion and navigation systems back to life.

A series of stability trials were held in 1995 to test all mechanical systems, and minor adjustments were made the following winter. Finally, by 1996, the restoration was complete. On May 25, with thousands of onlookers cheering her on, Minnehaha returned to passenger service for the first time in 70 years, signaling the rebirth of a bygone era on Lake Minnetonka.

Minnehaha operated continuously on Lake Minnetonka for the next 23 years, providing rides for an average of 10,000 passengers each season. In 2019, Minnehaha lost access to the launch site where she was launched and hauled out of the water each spring and fall, restricting her ability to be on the lake until a new launch site becomes available. Minnehaha is currently housed in a storage facility in the town of Excelsior. She is owned and maintained by the Museum of Lake Minnetonka (MLM), an all-volunteer, nonprofit organization dedicated to preserving the vessel and returning her to active service.

Minnehaha was added to the National Register of Historic Places in 2021. Volunteers continue to maintain the vessel, keeping her in proper condition for her eventual return to the waters of Lake Minnetonka. However, Minnehaha needs your help in order to return to the lake! For a nominal annual fee, you can sign up for membership which will help us preserve Minnehaha while we work to get her back in the water. You can also help spread the news about her situation and let local leaders know how important it is that the lake’s most important historical artifact be returned to active service for all to experience. And of course, we gratefully welcome any donation, big or small. Your support will help ensure a living future for Minnehaha so that she can continue to be an inspiration for current and future generations – thank you!